Technological Boundaries of the Digital Revolution – A Short Distance race? 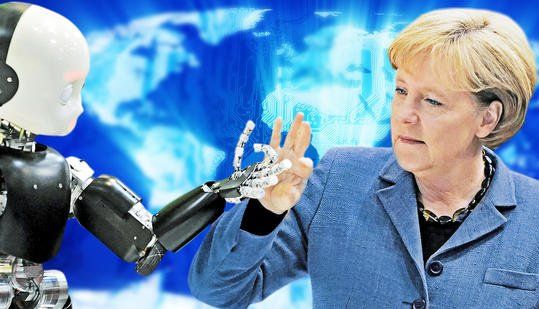 Germany is aware of its global position in the manufacturing, engineering and industries and is leading its economy into a new revolutionary era. The increasing and constantly growing computer power at even a lower price with recently unimaginable connections seemingly unrelated dispersed devices and gadgets with powerful computing and communication capabilities, revolutionise business models and opportunities for creating customer satisfaction!

The stonemasons of the new age

Computers have been in commercial use in business from the early 1960s. Chronologically until to this very day, their use has developed through three tech/org-phases: Mainframe, Client-Server and Cloud Computing technologies.

The initial use of electronic computers in business was the cause and later a trigger to organisational change. This was a cause and beginning to the improvement of business organisations, technological architecture and a symbolic incentive to future development. The application of electronic computers in business produced the fundamental questions of effectiveness of functional organisational structure. In this instance we have an answer to the fundamental question, "which came first? The chicken or the egg? ", once commenced, development is continued through a synergetic spiral.

Where are we now and what are the future prospects?

The final dynamic cycle of symbolic development of business organisational structures and technological architecture occured shortly after the beginning of the implementation of computers in business. In the long term, photolithography determined the technology of producing intergrated semiconductor circuits - IC respectively microchips. Photolithography enables the production of a large number of integrated electronic microelements, primarily transistors as well as diodes, resistors and capacitors in a thin layer of semiconducted tile material.

The number of microelements which can be produced on these tiles (measuring a few centimeters squared) using this unique technology is being duplicated every eighteen months. This is based on positive energy efficiency, labour output, speed and price. This empirical observation was published in 1965 by Gordon E. Moore. He was one of the founders of Intel, these principals are still valid today, thus the Moore law has been created in honour of his name.

The future forecast of further minimalisation by this law will reach out to the outer physical boundaries in the next ten years.

Speculatively even after the application of photo-lithographic technology to semiconductor materials and due to the binary nature of the prospective optical and DNA computing as well as other technologies, forecasts future development in line with previous experiences related to Moore's Law.

This has a primary and predominant positive effect to the dynamic symbolic development of business organisational and technological architecture and to the entire development of civilization and the global economy. It is a necessary point of view from micro-economic units, what are the optimal actions, responses to emerging threats and unpredictable environmental questions of prosperity.

For the answers and challenges of our surroundings we must act promptly, effectively and efficiently. Experiences and examples of succesful organisations confirm the scientific theories of management, Discipline of Management Science. Modern organisations, based on modern design, matrix or hybrid organic organisational structures, should be able to respond to the necessary changes. Likewise, on the same technological level, cloud computing if applied appropriately, enables fast, efficient and effective handling of new and typically unexpected business requirements, with a globally present saving mantra. These are the conditions that fuel cloud computing!